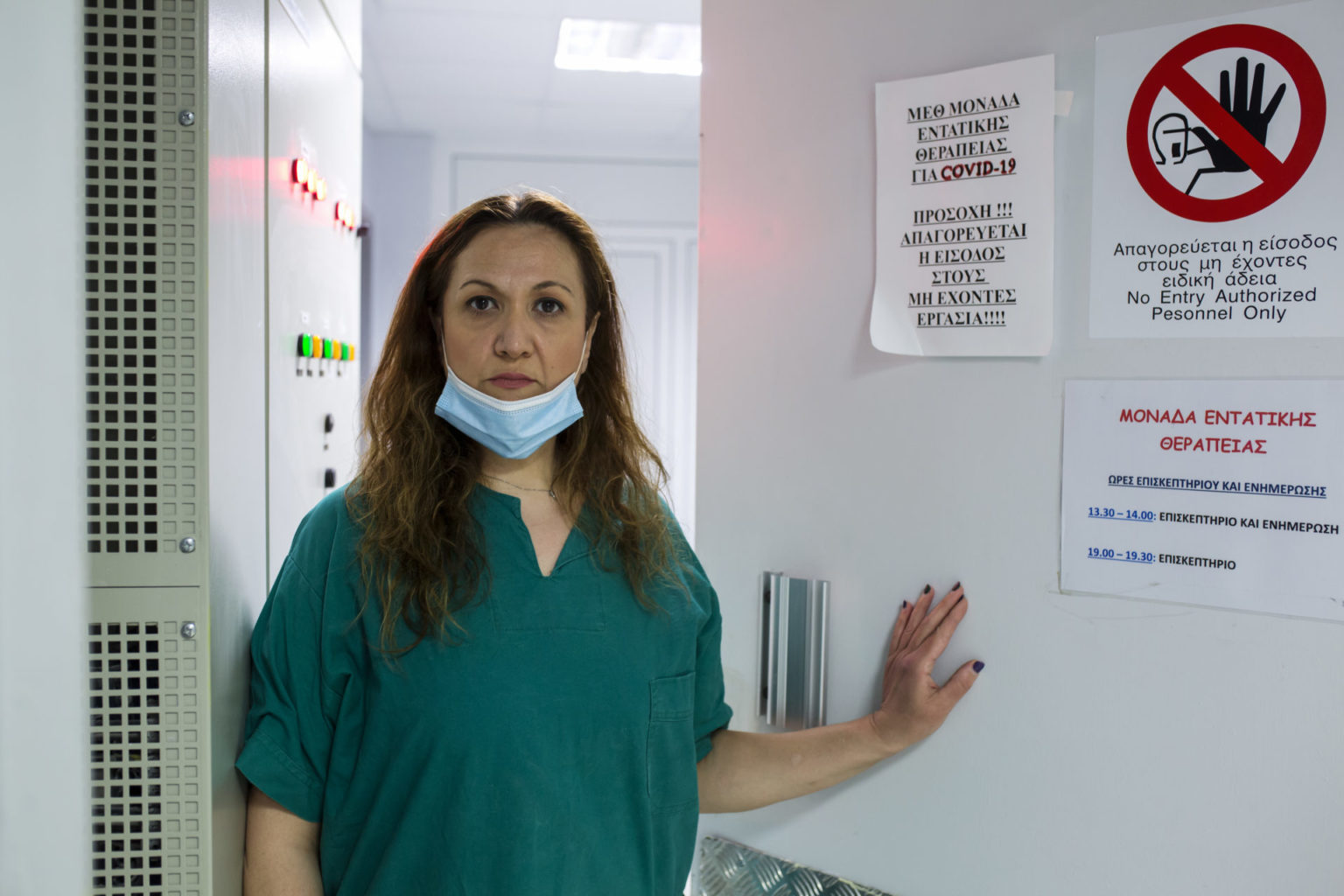 For the last twelve years, Alexandra has been working as a nurse at Asklepeio Voulas Hospital, eight of which in the Intensive Care Unit. When the first cases of coronavirus appeared in Greece, she did not panic, she was expecting it, she prepared a small suitcase and whenever she had a shift she would take it with her. If there was a confirmed case at the hospital, she knew she could not return home.  She may have taken all precautions, but her husband and young son belong to extremely vulnerable groups.

She didn’t even think for a moment to take leave and not go to work, but she started looking for a solution. She initially went to the hospital’s union. Other colleagues had a similar problem, so they asked the administration to provide a hotel for those working in the front-line. However, the procedures took time, so Alexandra started looking for a place to stay. Somehow she discovered a website that offered free apartments to doctors and nursing staff. She found the only apartment relatively close to the hospital and sent a message to Nelli, the owner:

“Good morning, good week, keep strong!! My name is Alexandra! I am a nurse at the Asklepeio Voulas ICU and as you know we are expecting the first case any time soon. At home, I have my son, who has a transplant … and my husband with coronary heart disease… is the offer for the apartment still available? Thank you very much for your help during these difficult times…”

On March 25, she would move in with two other ICU nurses who also lived with high-risk individuals: Maria and Ioanna.

The apartment had been given to a couple of doctors, but at the last minute they found another solution so Nellie replied that it was actually available. They exchanged a few messages – Alexandra insisted on paying all the fixed bills – and they finally agreed: On March 25, she would move in with two other ICU nurses who also lived with high-risk individuals: Maria and Ioanna.

All three were really relieved. They felt that they would face particularly difficult weeks and it was important that they could concentrate on their work without further stress. But they could never imagine what would follow. How they would be targeted by residents of the building who eventually complained that they pose a “health risk to permanent residents”.

This apartment has been owned by Nellie for years. Since last year, she uses it for short-term leasing. When she read on March 15 about an initiative by some, offering empty apartments to medical staff, she immediately wanted to participate, as well as to share it in the hope that others would follow.

These people are leaving their homes to avoid transmitting the virus to their own people, why should they come to us?

When a few days later, she went to prepare the apartment for the nurses, the elevator was out of order. A piece of paper was posted on the door: “Out of order due to covid 19”. She was worried. Her apartment was on the 5th floor; it would be difficult for her guests to climb so many floors. She thought that maybe the neighbours had learned her plans and were trying to stop her.  She confirmed her suspicion when she spoke to them. They told her clearly that they did not agree with her move: “These people are leaving their homes to avoid transmitting the virus to their own people, why should they come to us?” they told her.  She tried to explain that the relatives of the nurses were in danger because they were living in the same apartment. But they had no reason to worry, they were professionals who knew how to protect themselves.

Meanwhile, Alexandra was getting ready to leave her house. She had tried as hard as she could to organise, clean and do the shopping for her family. She put a few clothes, sheets, towels and an icon of Agia Marina in her suitcase. She got up early in the morning to go to work and although she had said goodbye the night before, everyone was up to see her one more time. They were all emotional and a little confused. Alexandra went to the hospital and, after the shift, to her new home. It was clean, bright and she could see the sea from the balcony. She felt good there but, while she was arranging her clothes, she burst into tears. She did not know when or if she would see her family again. She cooked something to eat and before going to sleep she sent Nelli a message to thank her for her offer:

“We are moved and relieved that you are next to us & show us your humanity (…) We leave our homes to protect our families as we should do for all of you!! (..) We promise that we will do our best to return to our daily lives healthy as soon as possible!!”

The next morning she went back to work. They had received the first cases and her daily routine was now completely different – First she had to go half an hour earlier to put on her special one-piece suit, overshoes, two pairs of gloves, glasses, mask and a hat. For the four hours she is with the patients, she can’t even go to the toilet. At the end of the four-hour shift, she carefully takes off her special clothes, washes herself and continues to work with non-infectious patients. When she’s done, she changes again to new, clean clothes and leaves for her house. She usually does night shifts so she returns around 5 in the morning. As quietly as she can so as not to wake the other nurses, she takes a bath and goes to bed. She is always very tired but stress keeps here awake. In the mornings, she talks to her family and tries to rest before the next shift.

Alexandra, shut up! Don’t be ungrateful. Think about what colleagues are going through in other countries. At least here in Greece we are doing well

But as the days went by, she began to feel psychologically and physically tired; she often felt down, but now she was hard on herself:  “Alexandra, shut up! Don’t be ungrateful. Think about what colleagues are going through in other countries. At least here in Greece we are doing well” she told herself.

One morning, she went out shopping. Wearing a mask and gloves, she returned loaded with the week’s shopping. At the entrance, she met some neighbours for the first time. She was introduced to them and they started asking her various questions about her job, if she is dealing with cases, what precautions she takes. Alexandra, realising their concern, tried to answer politely. She felt that the discussion had gone well. However, meanwhile, some irritated residents of the building asked the owner to arrange a “weekly special disinfection against covid-19 in all common and shared areas”.

On the one hand, we praise hospital staff as heroes, but if we feel they can come close to us, suddenly some become cautious, often negative.

Giorgos Intziadis, one of the founding members of the initiative for hosting medical and nursing staff, also noticed from the beginning a kind of social racism towards those forced to deal with the virus: “On the one hand, we praise hospital staff as heroes, but if we feel they can come close to us, suddenly some become cautious, often negative”, he explains. “It’s better not to be in danger… I live in the next apartment, maybe I’ll get sick… Disinfection will be a problem…” were some of the thoughts recorded when they first discussed making the apartments available. Since March 15, when the website was launched, 170 apartments have been made available throughout Greece. About twenty of them from the Association of Chinese Investors in Greece. These are apartments purchased by the Chinese as part of the golden visa program. Stamatina Markou, who manages the initiative on their behalf, confirms that she has also received objections and an out-of-court complaint from neighbours of an apartment made available to Sotiria hospital staff. “They asked us to move them because there was a risk of virus transmission”, he explains. The same day, Markou arranged to move them to another apartment, as he did not want to disturb relations with the neighbours.

However, Nelli, the owner of the apartment where Alexandra lived with the two nurses from the Asklepeio Voulas, would not even hear of the possibility of asking them to leave. She thought the issue would not go beyond the complaints she was receiving, but late on the night of April 6 she received a message from Alexandra:

“Good evening, I guess the malice of the neighbours is beyond imagination. They sent complaints to the hospital administration, accusing us of various things”.

…two complaints have been made to the director about three nurses. That there is a risk of virus transmission and that they partying at night

A few hours earlier, Alexandra was finishing her shift and she was in a good mood: They had just woken up one of the intubated patients at the ICU and he was responding well. Leaving the hospital, she found a message from the President of the Association, who was looking for her. She called her and she started asking her if there was a problem with her neighbours. “We’re relatively calm, why do you ask?” Alexandra wondered. “Because two complaints have been made to the director about three nurses. That there is a risk of virus transmission and that they partying at night”, she told her.

Alexandra listened in shock. She didn’t know what had bothered her most, that they were being treated like lepers or that they were implying that they had left their families to live the party life. She could not sleep that night. The following days, she contacted the director’s office to find out more, but they tried to reassure her. “The complaints have been archived. Please don’t bother yourself with the matter. We need you to be calm in the battle you are fighting!” she was told by his office.

It’s an oxymoron, on the one hand they applaud us and on the other they treat us like this. I wonder, about those who sent the complaint… if they or someone from their family came to the hospital, how would they feel if I closed the door in their faces and said, I don’t want you to infect me.

Alexandra, however, was angry. She felt that the complaint offended not only her but also all of her colleagues: “It’s an oxymoron, on the one hand they applaud us and on the other they treat us like this. I wonder, about those who sent the complaint… if they or someone from their family came to the hospital, how would they feel if I closed the door in their faces and said, I don’t want you to infect me”.

We confirmed that two complaints have indeed been sent to the Hospital Administration, as well as to the Health District.

With the indication “Extremely urgent – confidential”, someone complains about the apartment being rented to the nurses “who carry a huge viral load due to their work and therefore pose a risk to the health of residents”. The senders ask that they be moved elsewhere and that they be subjected to disciplinary control for bribery – as they had accepted a free benefit. To help identify the nurses “partying at night”, in the file, the complainants included a series of photos of their cars.