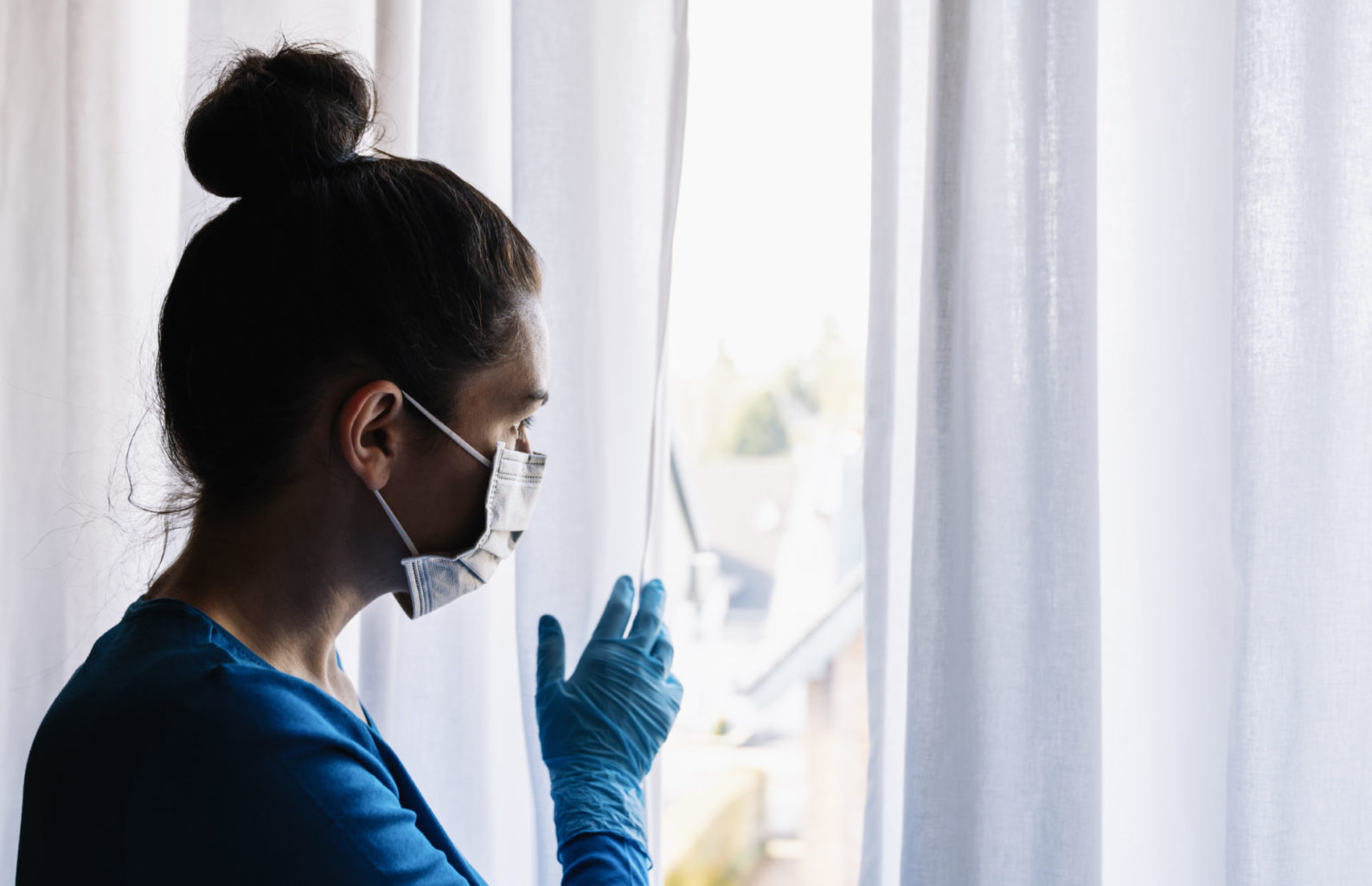 For Victims of Domestic Abuse, Lockdown is Not Safe

On March 18, a week after Greece announced a closure on all schools in response to coronavirus, and just a few days before the official implementation of the lockdown, two women were gunned to death outside of a supermarket in Kifissia. The perpetrator, a 35 year old police officer, used his service weapon to kill his ex-wife and her friend as they finished their food shopping. Police and witnesses initially thought the murders were a botched robbery – but this was neither a robbery nor a random killing. The perpetrator had a history of abusing his ex-wife, establishing a pattern of behavior that, if properly addressed from the beginning, may not have resulted in femicide.

As countries around the world began to enter into lockdown mode in March following the spread of the novel coronavirus, a macabre catch-22 emerged. Social distancing and shelter at home measures are necessary to prevent the spread of the virus. “We stay home. We stay safe.” is the directive that has been circulating around Greece. But what should people who live in violent homes do? Patriarchal violence and domestic abuse – which overwhelmingly impacts women, children, and LGBTQ+ individuals, though men are also victims – is a universal issue. But the alarming rate at which domestic abuse is rising across Europe has highlighted the preexisting, systematic failures to take victims seriously and adequately support them.

In the United Kingdom, domestic abuse killings doubled over a three week period in April. In France, incidents of domestic abuse have gone up by 32%, prompting the government to donate 1 million euros to anti-domestic abuse organizations, and pay for 20,000 hotel nights for victims. Greece, which does not have official, all-encompassing statistics on domestic abuse, has recorded an increase in calls to hotlines, according to Syrengela. In refugee camps, UNHCR has noticed an increase in the severity and urgency of reported incidents.

“There is a lockdown, but there isn’t a lockdown of our support, for counseling centers and support lines,” says Syrengela, noting the government’s domestic abuse campaign that urges victims to call or send a text to the SOS 15900 hotline. In normal times, hotlines can be life-saving. But when a victim is trapped in a violent home with a perpetrator, how can he or she even make a call? How can you guarantee that the abuser hasn’t removed all forms of communication? In Italy, activists noted a sharp downturn in phone calls, as victims instead reached out by SMS or email.

The Greek government had taken some small steps to addressing domestic abuse, at least for Greek women, in the last year. New legislation, pushing substantive gender equality reform, was passed in 2019. The same year, 73 new domestic violence services, based in each General Regional Police Directorate and each Police Department, were established all over Greece, with the aim of managing domestic abuse complaints. “Violence against women can happen to any family and any woman. Silence is tolerance and tolerance feeds violence,” Citizens’ Protection Minister Michalis Chrysochoidis said after the services were set up. “Victims are not to blame for the silence. We are going to give them their voice back.” The new department is in contact with local NGOs, including Diotima, to assist victims.

“It’s in the good direction, but it’s definitely not enough,” says Pati Vardhami, a local feminist and activist. While hotlines and specialized police forces are positive steps, it’s also true that there is a dearth of institutional support to holistically help victims after they make the initial phone call. “Sexisim is something really persistent in police stations and courthouses, and I believe it’s the next step we should take as a state,”  says Chara Chioni-Chotouman, an attorney with Diotima. “There’s no point in having campaigns and urging women to seek help if we don’t have the establishment and resources and people are not trained to help those women.”

Getting help is a multi-pronged process, with obstacles at every turn. “It requires action at several levels,” says Chioni-Chotouman. It’s also a process that places the burden of seeking external safety on the victim, as opposed to directly removing the abuser. Victims must go to the police station to file a complaint, though it’s not a straightforward process. Diotima has several recorded instances of police informing victims that if they continue filing the complaint, the abuser could in turn file a complaint against the victim, citing false accusations or psychological abuse. “We have cases where a woman is arrested along with the husband and the next day they both appear before court,” says Chioni-Chotouman. Such legal loopholes only serve to protect abusers – not victims.

These preexisting failures are all the more exacerbated by coronavirus. According to Diotima, there are cases of police restricting victims’ access to lawyers. In one instance, a migrant woman went to the police with her lawyer and translator – the lawyer was not permitted to stay with the client, as police cited social distancing measures. Should a woman successfully file a complaint, it’s a legal procedure that can take months, and in some cases years, to clear. “There is no complaint from the Greek police without investigation,” Hellenic Police spokesperson Ioanna Rotzikou told me.

When the case does go to court, it’s not always a guaranteed win. Judges are currently only reviewing cases they deem to be emergencies with imminent danger, at their discretion. “The system does not work,” says Chioni-Choutoman. “To me every domestic abuse case is an emergency.” Prior to the lockdown, judges were already throwing out cases – Chioni-Chotouman cited one instance in Lesvos, where a seriously abused Afghan woman’s case was dismissed on cultural grounds. The judge felt that domestic abuse was so mainstream in Afghan culture, that this case wasn’t particularly problematic.

The intersection of racism and sexism highlights just how traumatic the situation is for victims in asylum seeking circles, who are unable to even call the 15900 hotline, as translators are not readily available. “According to UNHCR field staff and SGBV partner Diotima, survivors have reported refusal by police to accept SGBV complaints by women who escaped domestic violence with their children due to the COVID priority, without providing them with an alternative,” says Anastasia Papanastasiou of UNHCR. In July, the government removed access to AMKA social security for asylum seekers, directly impacting a victim’s access to healthcare services. Papanastasiou also notes that “survivors who would like to report [say it] is often challenging due to lack of interpretation and reported refusal of police to receive complaints.”

For many victims, it’s unclear what will happen to them after filing their complaints, should they be successful. There are 42 shelters around Greece, and the Gender Secretariat has also placed some individuals in hotels during the lockdown. Shelters, now operating with limited staff, are not currently accepting new cases due to coronavirus; they are working to open up applications, but victims will require a more thorough medical examination, including a coronavirus test. Shelters also do not accept women who have boys older than 12 years old, which can force women into the traumatic choice of leaving their child with an abuser, or staying in a violent situation themselves. According to UNHCR, shelters also do not provide accomodation to survivors with mental health conditions, male survivors or LGBTQ+ persons.

While local NGOs and activist groups have helped fill in the gaps with psychological and legal support, there are few structures in place to help victims recover economically. And as illustrated by the woman murdered in Kifissia by her ex-husband, safety is not even guaranteed once the ink dries on the divorce papers.  “There is a need to raise awareness as to what produces this kind of abuse, and dismantle cultural stereotypes that are embedded in the Greek society,” says Vardhami, who would like to see a parallel system that tackles misinformation in the cultural and educational sphere.

Amidst all this, there’s a small glimmer of hope. “I believe that at a European level this lockdown may be the trigger to rethink our policy on domestic abuse,” says Chioni-Chotouman. “To have a directive at the EU level for what is domestic abuse, to rethink our fundamentals of domestic violence and have a common policy.” It’s a tiny sliver lining, but one well worth examining. Otherwise, even once lockdown restrictions ease up, businesses reopen, travel resumes, and a vaccine is hopefully found, domestic abuse will persist.